Can you believe it's the end of the month already?!

As promised here's the little oddball which was hidden behind the EHAG poster ;o) 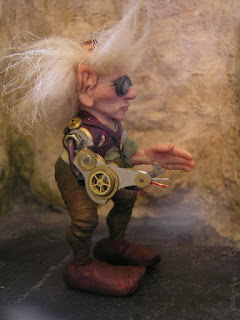 The challenge was to create something from the word 'SCREAMPUNK'...kind of Steampunk meets Spooky...so as usual mine decided to do its own thing and become an Elf!
If I'm honest, I think he's rather odd looking (and from me that's saying something!)...but when my clay and oddments start to go in a direction on their own, I let them...it makes creating something a happy experience and not a chore :o)
This is little Kestrel Sparkplug Sprocket the third, from the back...(I could just bite his bottom). He measures a whopping 3 inches high!!! 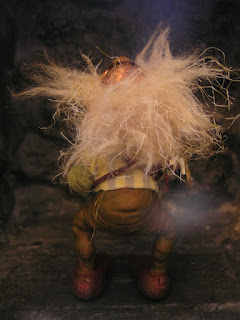 Here's a little I wrote about him for Etsy...Kestrel, The Steampunk Inventor Elf

*This teeny little elf was created for the EHAG member's challenge entitled 'SCREAMPUNK'
He's my humble offering and as you can see, he is a little oddball ;o)
His full name is Kestrel Sparkplug Sprocket the third, (I know that his name is bigger than he is, but he has been steadily growing into it)
I believe that he was born with only one arm but being born into a family of inventors, his grandfather made him a little replacement from stuff the big Human Beans leave lying around.
He has never known anything else, so does not feel in the least bit disabled...and being an Inventor Elf himself, he has updated his arm over the years as more useful items have been found, he even made his own little hat (you would never believe the amount of good stuff folks throw away!). *

I have no idea why he ended up like this but there you go...
If you would like to see what all of the other EHAG members came up with for the challenge, pop over to the Emporium and take a peek :o)

Posted by Oberon's Wood 3 comments: Links to this post

Hi everyone :o)
The sun has been gracing us with his presence for a week now!
North Wales actually had the most sunshine for the UK.
We are normally known for the highest rain fall, so this is really odd for us...
No rain coats or umbrellas!
I feel positively naked!
Which brings me swiftly on to my new mini...see you couldn't even see the join it was so seamless he he he 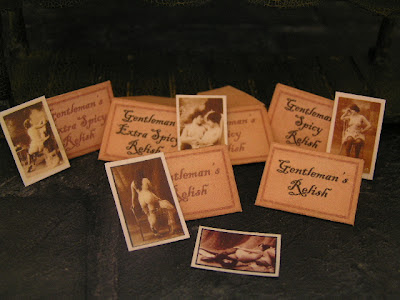 
It makes no difference how many times I repeat the fact that this is an aid to my arty stuff, he just recons I'm weird...well no shock there eh?

I started to laugh at some of the old Victorian pictures as they were so odd back then, and this made me think of all of the funny 'Gentlemen' who would have purchased these pictures...which made me want to add some to my miniature world...which then led to editing bits out and shrinking...etc...and this was the result :o)


Posted by Oberon's Wood 2 comments: Links to this post

Spring time...although looking outside up here in dreary Snowdonia, you would think it was Autumn!
Ah well...that's Mother nature for you!
I've been playing around with something for the EHAG Screampunk challenge...but it's still a secret, (so don't tell anyone, okay?)
This is a little sneak peek... 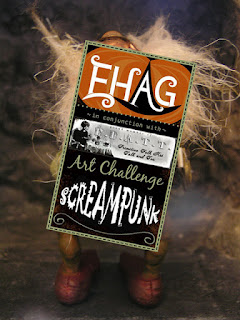 Can you tell what it is? :o)
It looks kind of cute from this angle but it isn't from the front!
I've not been doing much in the form of 'Arty' stuff for a while as we have to clear the HUGE brambles and bracken out of the fields, which is an horrendous task which creeps up on us, much like the brambles ;o)
It was nice to have an excuse to not stick my wellingtons on and be able to sit at my table trying to remember where I'd put the one tool I really needed and which I couldn't find amongst all of my mess!

So...how are you all then...enjoying the Springy-ness everywhere?
All of the little yellow daffodils are smiling outside, which makes your heart feel all bouncy and renewed...just what we need after a long winter.
I might actually pull my wellies on and tramp through the mud to take a big sniff of Spring...after I've had another cup of (nettle) tea though...it's still a bit chilly after all ;o)