I Thought Trolls Were Invinceable...

We have a large badger hole in our front garden...
Last year, we all fell into it.
Unlike Alice, when she fell down the rabbit hole and ended up in wonderland...
We arrived in Hades.
Last Autumn (2021) we were preparing our home for the usual Autumnal celebrations.
We like to feel the changes in the weather and welcome in the seasons.
Then the Shadow of Death decided to come and play too...
The Troll (Steve) was diagnosed with stage 4 colon cancer.
He was rushed into hospital and the plan was to remove the growth and a section of the colon.
The surgeon cut him open and found that the 'aggressive' cancer had spread into his small intestine and so he could not cut the tumor out.
He gave him an ileostomy instead.
Steve was very weak and in agony.
None of us could visit him at any time because of the covid rules.
While all of this was happening, our water tank had stopped filling up from our stream.
We had no water, none to drink, bath, wash clothes, nothing.
We also now had no transport.
Steve was the only one here who can drive.
(We would not be able to visit him even if we were allowed.)
Living up a mountain with no transport is  like being in another world.
A world of Nightmares.
After a few weeks he came home and started to adapt to his life with a stoma.
He hated it.
When he had gained a little weight and started to feel a little stronger, he started Chemotherapy.
This is when our loving, kind, gentle, soft-hearted Troll turned into a monster.
The medicines he was given turned him into a very aggressive character.
He was not our Troll any more, he was a Troll from a story book.
I had no idea that chemo could affect a person in this way.
It was hard enough trying to cope with our grief without having to live in the world of Grimm.
When each course of chemo would end, he would come back to us.
He would return to being our big, daft Troll.
I have to be honest here and say, I am ashamed of the feelings I had during these times, the steroids he was given made me hate this stranger who was living in our home.
Then he would say goodnight to me in his normal voice and I would hear my Troll again.
The one I loved.
My children (two of the three) live here too.
The levels of anxiety we experienced during his hospital stay were unbelievable.
We did not know if Steve would ever come home or if he would die in the hospital, alone.
My son has asthma and anxiety and added to this, he was worried about trying to get a job, to help support us.
There are no jobs here, at all.
My daughter became the official rock and boulder mover.
Helping sort out the overgrown garden.
Steve could barely lift himself out of a chair.
Anxiety seemed to become a layered cake.
Each worry added another layer to the tower.
Each new problem became a filling holding up the concoction.
I take this cake up the stairs to bed with me.
It lays on my chest all night.
It stops me from sleeping.
Or breathing.
My blood glucose levels became another worry.
Trying to keep level and not stressed is so hard in these situations, for anyone.
When you have Type 1 Diabetes it can become life threatening.
The story of my T1 diagnosis can be found in this post.
Money is another issue.
Steve is the breadwinner.
How will we pay our mortgages without him?
How will we pay anything?
We have no savings at all.
Another layer added to that Alice in Wonderland cake.
As I write this, we are waiting for Steve to come home from the hospital again.
He was taken to A&E last week after he vomited so much gunk he screamed and howled.
He had fallen ill again...on my daughter's birthday and spent the day in the local cottage hospital.
Turns out, the chemo horrors he went through, did nothing.
His tumor has grown into his small intestine so much, it has caused a blockage.
Nothing he was eating could get past it, so he was ready to burst.
He cannot eat but he can drink.
He was told that there is nothing they can do now about the tumor.
No operations, no chemo.
He wants to come home.
We are now just waiting for our Troll to come back up the mountains to us...
Posted by Oberon's Wood No comments:

Strange to think that something so lovely can also be seen as terribly deadly.

The part of our memories where fear lurks, tells us that these females can lure men to their watery graves if they listen to their songs.

You would think that these ladies had better things to do with their time...?
You would be right.
No one would want loads of human corpses floating around the seas when there are so many other human things floating around to clean up.
As you can see, my mind is doing thinking stuff.
Which makes my art do thinking stuff too.
So, I was thinking about the beautiful coral seas and how they need to be protected.
(Along with all of the other seas)
And this idea of a beautiful strong female found her way into my sketchbook.
Along with some of these other scribbles...
So I started painting her, well that was the idea...
But she didn't look right to me, her tail was wrong, it was too chunky. 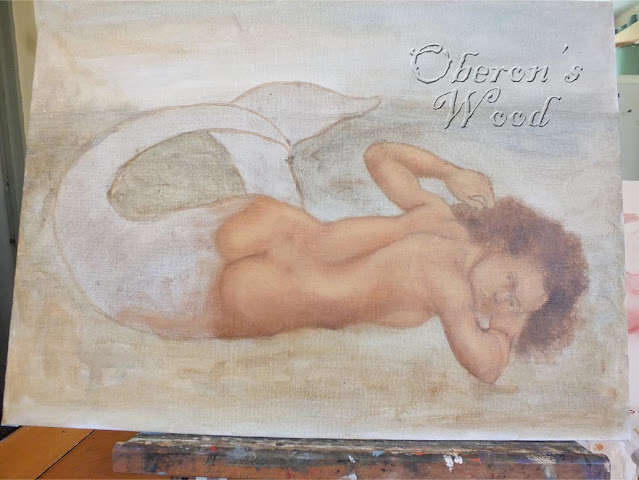 I also didn't like the angle of the tail.
The hair looks a mess right now but I have plans for that, so it doesn't concern me too much.
Just that chunky tail.
Time for some repainting...
Now, I have to confess here that I forgot to take more pictures of her being painted.
So I'll try my best to describe my actions...
I did all sorts of daubing and scraping and mopping of brows.
I did layering of paints and then wiping off the same paint because it was horrid.
I even did hair styling!
After lots of chocolate and many cups of tea...
I think she finally looked how I saw her in my head.
(Although paintings are never really as good as the ones in your head!)
Here she is, finished, along with her story. 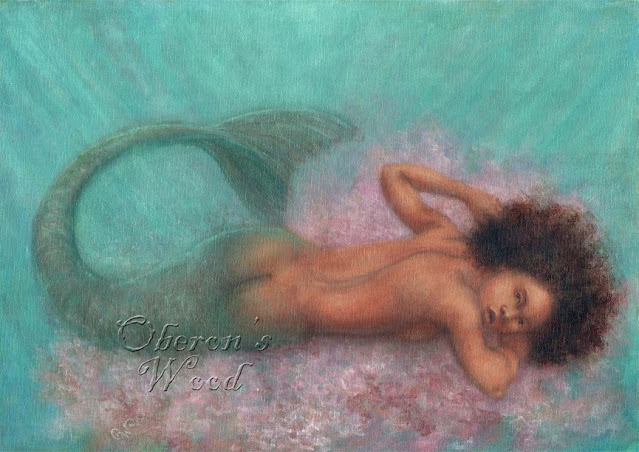 This lovely mermaid is one of the Guardians of the Coral Seas.
She swims many miles in the beautiful water each day making sure the reefs are safe.
Sometimes she takes a little rest and gives the coral a (careful) hug.
She is caring and protective and tries to ensure that no one harm the precious sea bed in any way.

Posted by Oberon's Wood No comments:

The Water is Lovely, Dark and Deep...

Oh my, it appears that I have been absent long enough, so I thought I would show some of my work in progress.

As you can see, I change my mind many times while I paint.
It will also show some of my horrendous mistakes!
I had an idea for a mermaid/siren, floating (see what I did there) around in my head.
She started as a rough sketch as usual, like this
Here she is as I start the painting.
The first layers of paint make her look a little creepy!
I think she is a little too skinny for my idea...time to give her a little more flesh...
Also, something needs to be done about that hand!
That's better...she has some fingers and flesh.
Now the part where I leave the painting to fend for itself whilst I get on with other 'important' stuff.
(Like looking on ebay :o) )...
Some time later...
After buying tacky items which Oscar Wilde would love...
(I'll show and tell one day, just so everyone can laugh at my taste).
She now has a little more colour...not too much as I want her to look fishy.
Just a dab here and there with the makeup, and maybe a new hair do.

Almost done...now is the hardest part of painting.

Everything in the early stages is just blobs and changes and big brushes and daubs.
When you get near to completion it is so much harder.
Small brushes, tiny strokes, lots of mistakes to cover.
Then comes the time when you have to ask yourself if it will ever be finished...well, will it?
I do not think that I am ever truly happy with a painting.
They are just never as 'good' as the painting inside my head!
They never will be either.
But that's the thing which drives you on.
Never being quite good enough.
So here she is, along with her story...
'Guardian of the Seas'

The sea is so vast and so precious.
We need to protect it any way we can.
This is how I envisage the Spirit who guards and protects the waters of this beautiful planet.
She may be a Mermaid.
She may be a Siren.
She may be a Nereid or Naiad.
She goes by many names and in many guises.
She loves the waters and keeps them safe for us all to share :o)

Hope you enjoy your next visit to the beach ;o)

Posted by Oberon's Wood No comments: